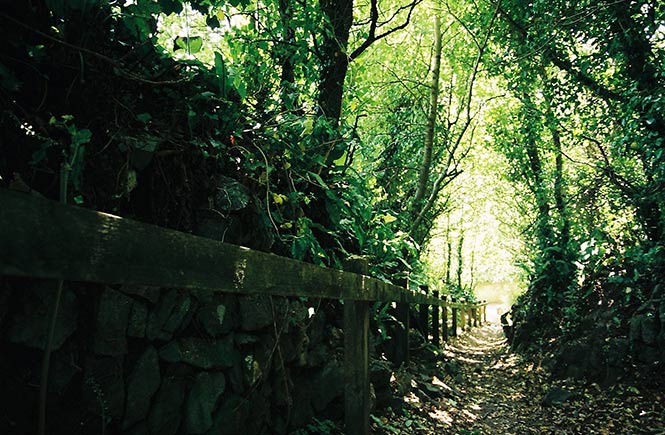 There is a network of pilgrim routes throughout Europe which lead to the Cathedral of St. James in Santiago de Compostela in north-west Spain. St. Michael’s Way is one of the routes. In mediaeval times pilgrims from Wales and Ireland crossed Cornwall from Lelant to Mounts Bay rather than risk the dangerous waters around Land’s End.

In 1987 the Council of Europe promoted the Santiago de Compostela Pilgrim Way as a significant and symbolic cultural route. St. Michael’s Way has been developed by Environment and Heritage with the guidance of the Bredereth Sen Jago (Cornish Pilgrims of St. James) and the Cornish Bureau for European Relations.

St. Michael’s Way is signposted and waymarked in both directions by a stylistic shell based on the Council of Europe’s sign for pilgrim routes. The directional arrows are coloured yellow for footpaths, blue for bridleways and red for byways. Cornwall Council has chosen to use black arrows on roads. A full St. Michael’s Way Guide can be purchased for £3.00 (including postage & packing). Contact Cornwall Environment Service on 0300 1234 202.

The whole walk from Lelant on the north coast to Marazion on the south is to experience a variety of landscape and atmosphere. You start and end on the coast but north coast light and south coast light are different. You climb Trencrom Hill, high wild moorland, yet woodland on the south side; visit The Bowl Rock. You cross Red River in the valley below Boskennal. You Visit Knill’s Monument on the hill behind St. Ives and Carbis Bay. You can visit Lelant, Gulval and Ludgvan Churches. Not to mention Marazion marsh. In total it is 12.5 miles/19.5 km.

A circular walk from Marazion on St. Michael’s Way

There is a circular walk from Marazion. You can start it either way of course but we reckon this way is best: Start by going up Virgin Hill out of Marazion, walk on to Gwallon, Lower Quarter and Ludgvan (where you could visit the church and/or The White Lion pub) then turn southwards towards Gulval (there’s another pub here, The Coldstreamer, which we featured on our Guide to eating out in Marazion). From Gulval you come down towards the coast, cross the A394 at the crossing on the Penzance side of Sainsbury, and the Railway line by the footbridge; and then you follow the coast back towards Marazion and St. Michael’s Mount.

We reckon this is a good day out. If you stroll off mid-morning, and allow yourself time to stand and stare at your surroundings, have lunch, consult the map, have a pint and get lost, you’ll be back in time for supper. (The walk along the beach from Penzance to Marazion is about 3 miles.)

The exciting thing is that once you have a map, you can just set off and walk out of Marazion on the Pilgrim’s Way and go as far as you fancy; and then turn around and walk back, facing the Mount, just as the pilgrims did. You’ll have walked part of the Pilgrim’s Way.

Similarly, you might drive out to Lelant or Trencrom and just walk a little on the Pilgrim’s Way. At Lelant, you can visit the church as well. On Trencrom Hill, you can visit the Bowl Rock or wander through the woods or just stare this way and that way… watching the sea on both coasts.

The O/S Landranger Map: Land’s End & Isles of Scilly (St. Ives & Lizard Point) shows the National/Regional Cycle network for the whole area. There are some great cycle routes but the roads are narrow so be aware of oncoming traffic. You might even meet a double-decker bus! You’ll certainly meet heavy farm traffic occasionally, especially during harvest.

St Hilary is well worth a visit. The church has a thirteenth-century tower and spire.  There are works of art by Harold Knight, Dod Procter and Anne Walke, wife of the famous vicar Bernard Walke.

Anybody with a real interest in colourful characters will enjoy reading about the life of Bernard Walke, the pacifist vicar in his long cloak who rode donkeys and was a keen friend of the artist community.  For almost a decade from 1927 the Christmas Play ‘Bethlehem’, written by Walke and performed by parishioners, including children, was broadcast live on the wireless by landline. ‘A line was set up between the church and Trevabyn Farm where there was a telephone, a line that hung on trees and trailed along hedges, and at any moment during the transmission might have been interfered with by one of the Trevabyn bullocks.’ (Twenty Years at St. Hilary by Bernard Walke) This was the first live outside radio broadcast and it happened in Cornwall.

For the perfect day out, why not walk the St Michael’s Way, tour the magical St Michael’s Mount, and refuel at one of Marazion’s eateries featured in our Guide to eating out in Marazion, before heading back to relax in the comfort of your own holiday cottage.

View all of our Marazion Cottages >