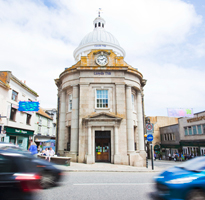 Visit the medieval town of Penzance and you’ll find plenty to do in this small fishing town. Take in the views of the harbour, or venture in to town and explore the historic streets and architecture…

Leads from the harbour up to the town centre.

As the town developed, the old chapel of ease was knocked down and St. Mary’s Church was built 1836, designed by Charles Hutchins of St. Buryan. There is also a large Methodist Chapel (1813) on Chapel Street.

The Turk’s Head – on Chapel Street is the oldest pub in Penzance.

The Admiral Benbow – with a sailor on the roof for good measure, is a pub full of naval artefacts and yarns, especially on a folk club night.

Maria Branwell’s House – There is a commemorative plaque to the aunt of the famous Bronte sisters.

The Regent Hotel – One of the oldest buildings in Penzance, originally a Temperance Hotel and staging post.

The Union Hotel – at the Town end of Chapel Street is where early news about the Battle of Trafalgar and the Death of Admiral Nelson was announced. The news was brought by fishermen who had heard it from the Naval vessel, HMS Pickle. There are the remains of a Georgian Theatre (1787) at the Union which, if restored, would be the oldest example of its type in the country. There are also the remains of a cock-pit.

The Egyptian House – was built in 1835, in a style of building which became in vogue after Napoleon’s 1798 campaign in Egypt. It was originally built as a museum and geological repository.

Regent Square – You can find this square just off Chapel Street. Fine examples of Regency housing built just far enough away from the noise and smell of the harbour.

Exchange Gallery – This contemporary gallery, built into the old Penzance Telephone Exchange is on Princes Street, just off right at the town centre end of Chapel Street.

Market Jew Street is the main high street and like all high streets, it is in the process of adapting to new out of town shopping habits. However not all town centres have the beautiful granite terrace and arcade steps, the iron railings; or retain the architecture of previous generations above the modern shop frontages. There are many Georgian and early Victorian facades just above eye-level in Penzance.

At the lower end of Market Jew Street is the recently built Wharfside Shopping Complex.

There is a fantastic independent bookshop on Market Jew Street: The Edge of the World Bookshop.

Pellows Bakery: a local baker who bakes on the premises. Great bread, try the Rye loaves!

Archie Brown’s Health Food Shop & Restaurant, which must be one of the best health food shops in the whole of the UK, is on Bread Street, off Causewayhead and parallel to Market Jew Street.

At the town end of Causewayhead is Greenmarket which leads out past St. John’s Hall and Alverton. Causewayhead is the third main retail Street of Penzance. Causewayhead comprises mostly small independent retailers. Well worth a visit. At the top end is the site of the old cattle market, now a car park.

Half way up is The Savoy Cinema. Built in 1912, The Savoy Cinema is said to be the oldest continually running cinema in the British Isles. It has a flourishing film society and has survived the changing habits of cinema audiences.

The Lighthouse Gallery is also on Causewayhead. A lovely independent commercial gallery. www.lighthouse-gallery.com

For other ideas on what to do around Penzance, check out our blog.

View all our Penzance cottages >