Home
>
Blog
>
Places to visit
>
A guide to the Eden Project, Cornwall

A guide to the Eden Project, Cornwall

Where else in Cornwall can you walk for less than a minute and go from a humid Amazonian jungle to the cool and sloping hills of the Mediterranean? In this, and many other aspects, the Eden Project is a truly unique and unmissable experience and it’s right here in Cornwall.

With incredible floral displays, hidden statues, interactive displays and some fantastic cafes and restaurants, the Eden Project really does have something for everyone, making it a great day out for the whole family.

You can easily spend a day wandering around the 30 acres of colourful displays and other-worldly corners so when we say that the Eden Project is a fun day out for the whole family, we really mean it.

Getting to the Eden Project could not be easier with access by bike, on foot, public transport or car available. If you arrive by bike and don’t want to lug your kit around, you can store it in the Eden Project’s handy lockers that are located at the Banana car park and visitor centre. 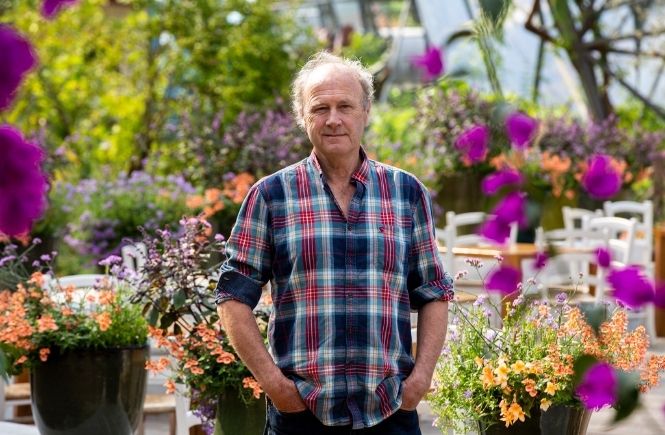 Starting off as a deteriorated clay pit set 60 metres into the Cornish earth, nowhere in Cornwall has seen a more incredible transformation than the Eden Project, and it’s all thanks to a group of dedicated people who wanted to say “I’m glad I did” rather than “I wish I had”.

The concept of the Eden Project was created in a pub in 1996 when initial designs were scrawled on some napkins. Eventually the idea of creating giant bubbles formed. This design was chosen due to the structure of bubbles as they can settle anywhere, even huge and uneven clay pits in north Cornwall.

With the idea set, work began and over the years thousands of seeds, bushes and trees were planted, eventually creating the 'eighth wonder of the world’ that we know today.

A big part of the history of the Eden Project is the aim and ethos behind this incredible venture. The Eden Project’s mission is to deepen people’s understanding of the climate emergency so that we, as a collective, can make positive changes to protect our world. So, as you walk around Eden, make sure to keep an eye out for the countless facts that are on display. 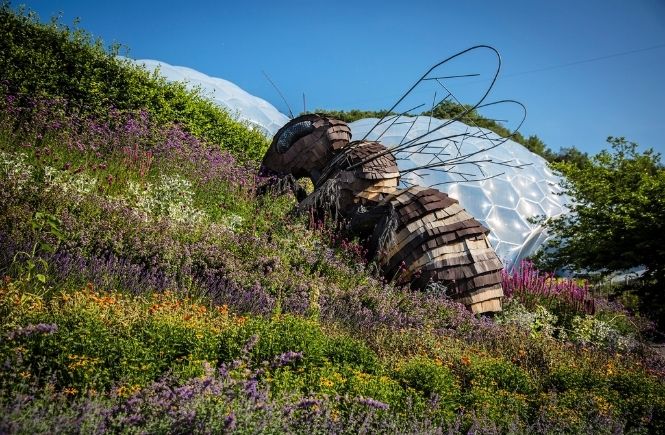 Before you reach the world-famous biomes, a sloping walk through layers of plants and statues awaits.

What was once a barren landscape now acts as a welcoming walkway to the Eden Project that houses over 3,000 varieties of plants. Some wild and untamed, and some carefully cultivated, the 20 acres of garden are home to a selection of different displays, which often change with the season.

Art installations that include giant bees, and frames that show what the area used to look like are dotted around the outdoor garden, along with beautiful areas of mystical beauty and intrigue.

Following the Eden Project’s passion for learning, a variety of signs, educational displays, and interactive installations can be found in the gardens, giving a deeper look behind what you see, which are interesting for both the kids and grown-ups! 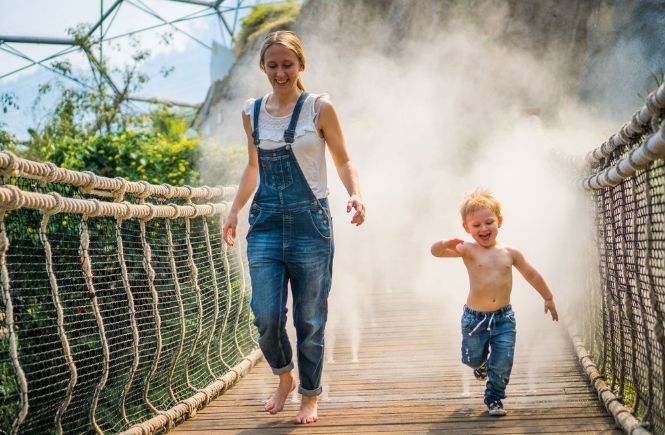 At a staggering 55 metres tall and 100 metres wide, the rainforest biome is home to the world’s largest indoor rainforest, which is made up of over 1,000 varieties of plants and covers habitats from Southeast Asia, West Africa and tropical South America.

With handy little signs dotted around with information on plants, countries and the environment, as well as fun interactive and educational displays, walking around the biome and taking everything in will take you at least 1.5 hours (more if you get distracted by the many birds who call this paradise their home).

During your tour of this tropical treasure-trove, you’ll discover a huge indoor waterfall, a wobbly treetop bridge and you can even climb to the very top of the 55ft tall viewing platform!

During your jungle trek, stay on the lookout for some of the more exotic and interesting plants such as the titan arum, which stinks of rotten flesh for 48 hours when it blooms, and the giant Santa Cruz water lilypads that float in the pools.

The temperature varies between 18–35°C so you’ll want to wear something fairly cool. In the winter months we recommend carrying your jacket rather than wearing it inside this biome.

Our top tip to beat the temperature has to be grabbing one of the Eden Project’s famous ice creams before you head in. Inspired by the fruits of the rainforest and found on the balcony before you enter, their wonderfully cooling selection is made using unrefined whole sugar cane so you can taste the tropics while you explore them. 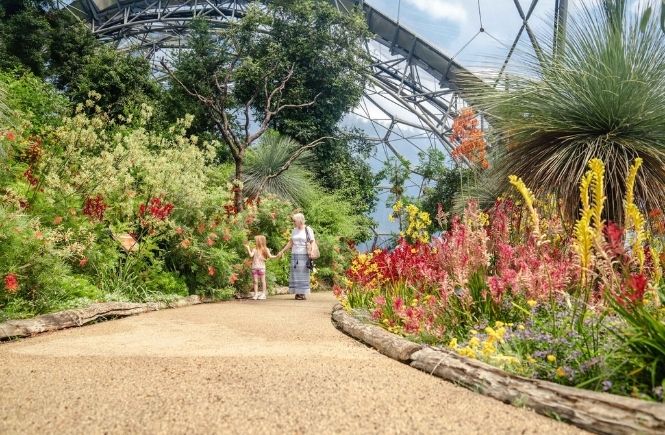 Encompassing the Mediterranean, California, South Africa and Western Australia, the Mediterranean biome is full of secret groves, hidden sculptures and some truly incredible sights and smells.

Prickly cacti and beautifully detailed flowers await in this trip to the continent. One of our top tips for this biome is to make full use of your senses, including touch as some of the flowers are very tactile and have scents and patterns that are best enjoyed up close.

Some interesting collections to keep an eye out for include the citrus grove, the perfume garden, the Western Australia garden and the golden path that leads you through the twisted trunks of the olive grove.

While ambling around the pretty stone paths in the biome, keep an eye out for the many sculptures that reside there. From an imposing Greek god to a family of cork pigs that pull at the heartstrings, there are lots of things to discover in this fascinating giant bubble.

On certain days you can find storytellers and other performers in the biome, making it a great stop for the kids.

The temperature is cooler than that of its tropical counterpart at 9–25°C making it a welcome change from the humid environment of the neighbouring tropical jungle. 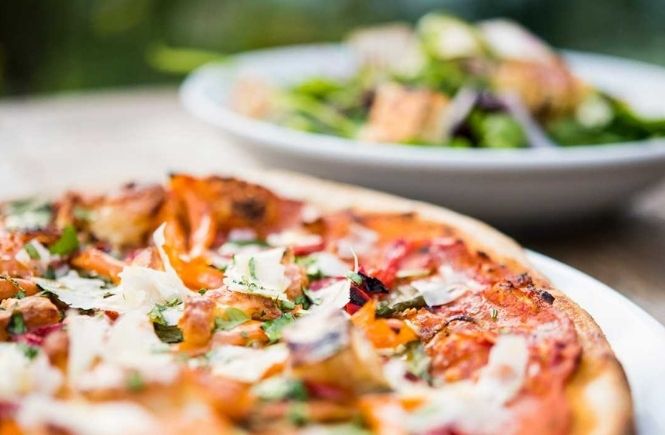 The Eden Project is peppered with relaxed cafes, ice cream bars and restaurants, so you can treat the taste buds along with the other senses during your visit.

Following the theme of sustainability that the Eden Project so closely follows, each of the food outlets make sure to source ethical and sustainable ingredients and products so you know that you’re getting good food that’s also good for the planet.

Kicking things off as you enter Eden, the Eden Coffee House is situated in the visitor centre and is the perfect spot to indulge in an ethically sourced coffee and cake that you can eat in or take it with you as you explore everything Eden has to offer.

From sourdough pizzas to hand-rolled burritos, the Biome Kitchen is a great place to stop and refuel during your visit. Nestled on the ground floor between the two biomes, whether you’re looking for a quick bite or a substantial feed, sit down to a delicious meal that could easily have come from a family-owned restaurant in Italy.

If you’re after something a little lighter, you can pick up a super comforting toastie or sourdough melt from the Little Lunch Box, which sits just outside the Biome Kitchen.

You can also pick up an ice cream in this area, giving you the perfect sweet treat to finish your meal.

For the organised people out there who like to bring their own food, a range of picnic areas and benches around the gardens enable you to enjoy your lunch surrounded by the sights and smells of the carefully curated displays. 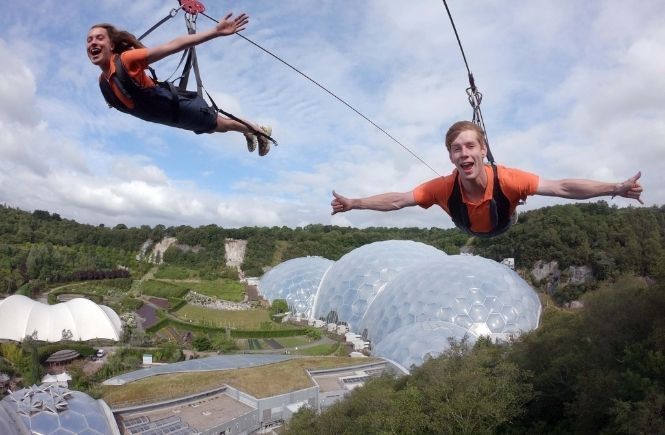 It goes without saying that the best thing to do at the Eden Project is to explore the many displays dotted around the gardens and biomes, but that’s not all there is to do.

Fly through the air above the biomes on the longest and fastest zipwire in England, conquer great heights on the aerial assault course, test your bravery with a leap of faith, and much more with the Eden Project’s slew of activities with Hangloose Adventure.

In the Core building, which is the one shaped like a giant sunflower, you’ll find an absorbing exhibition all about the interconnectivity of life from its tiniest organisms to its biggest accomplishments. Inside the Core you’ll also find two of the most interesting man-made installations at the Eden Project: a huge granite seed-like sculpture and a giant blue sculpture that breathes. 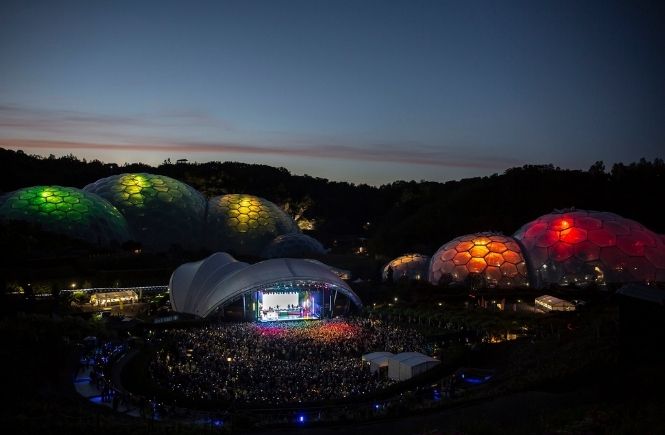 With biomes lit up like giant disco balls, you couldn’t ask for a better setting to a live event than the Eden Project. With performers such as Amy Winehouse, Muse and Elton John having graced the stage, it’s always worth keeping an eye out for who’s coming up for the Eden Sessions as you never know which acclaimed artist will be next. 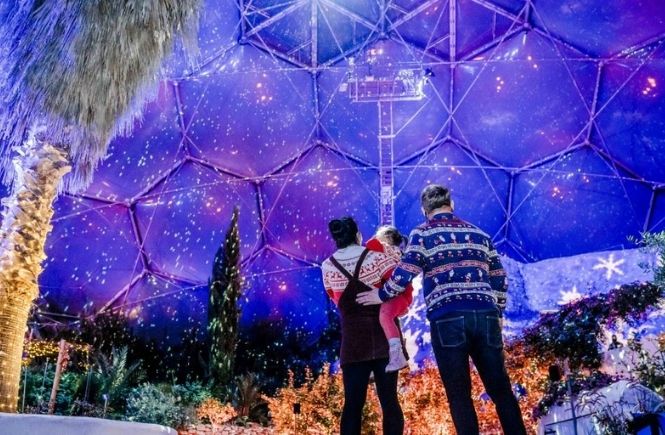 Christmas is always a magical time of year and the Eden Project is no exception. A temporary ice skating rink is built for the winter months, allowing everyone to strap on their skates and fall over in a festive fashion. During this period, a pop-up Ice Rink Burger Bar emerges so you can warm up in style after your spin on the ice.

Continue the Christmas festivities at Eden with a tour of the dazzlingly lit biomes. In the rainforest biome you can take a colourful tour up to the illuminated waterfall, which adds even more beauty to this indoor wonder, while in the Mediterranean biome you can enjoy Christmas music and a glittering disco ball, turning the whole place into a giant, encapsulating snow globe. 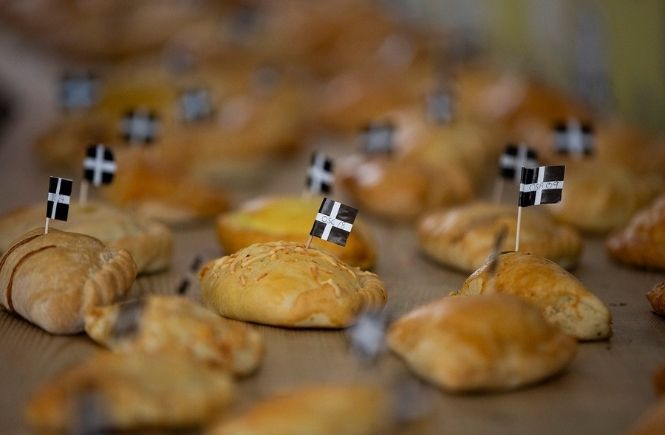 At the start of the year, the Eden Project welcomes its Cornish heritage as it hosts the World Pasty Championships, which sees people from all over the world battling it out for the title of world’s best pasty. 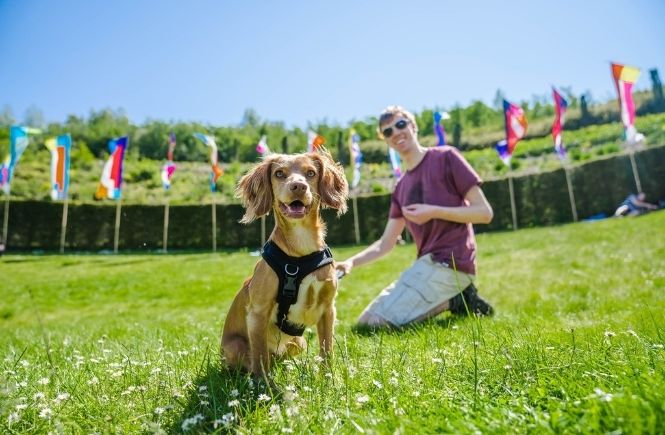 The Eden Project prides itself on accessibility and inclusivity and it’s easy to see why. There is no admission charge for personal assistants and assistance dogs are welcome throughout Eden, including the biomes.

The Eden Project is completely accessible to those who need a wheelchair and has around 40 free-to-use wheelchairs on site for visitors, which are available in the Apple car parks and visitor centre. They also have six powered chairs and an all-terrain tramper mobility scooter, which can also be hired out and is perfect for touring the steep slopes of the outside garden. These can go fast, however, so if you would like to book one for your visit you can do so by emailing boxoffice@edenproject.com or calling them on 01726 811911.

For those with visual impairments, a range of options are available. There is a Braille guide book available for your visit, as well as high-powered magnifying glasses, text readers, and even an Access Guide to support you throughout your visit. 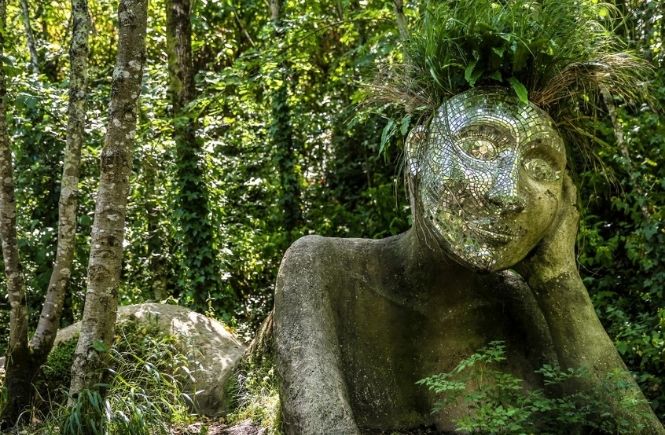 There are countless interesting facts you can learn during your visit to the Eden Project, but here are some of our favourites to get you started...

Ready to explore and discover the wonders held at the Eden Project? Find out more and book your visit now.

Book your Cornish holiday today in one of our holiday cottages and take a look at some other beautiful places to visit in Cornwall to start planning your adventure.