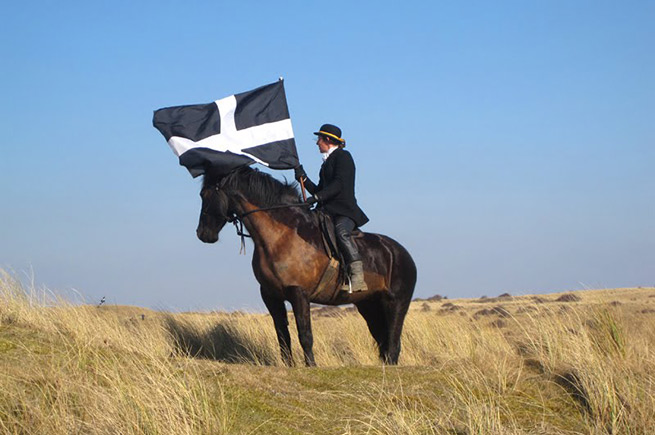 Held on March 5th every year, St Piran’s Day celebrates the patron saint of tin mining and Cornwall. Observed for centuries as a feast day where miners downed their tools and much merriment ensued, these days nearly every Cornish community marks the occasion with some kind of event – processions and parades, music and dancing, festivals, fetes and fairs, rugby matches, even pasty throwing competitions.

With Cornish people having been granted minority status in 2014, and calls for St Piran’s Day to be acknowledged as a public holiday, small wonder this day has come to symbolise the sense of national pride that Cornwall has.


According to legend, Piran was kicked out of Ireland in the 5th century AD. Despite his pious ways, he was said to be a notorious drunkard, with the Irish King also somewhat suspicious of his strange powers. Tied to a millstone and cast off the Irish coast, he miraculously floated across the sea to ride in through the Cornish breakers at Perranporth and become the world’s first ever surfer!

Piran went on to build an oratory in the dunes to promote Christianity, where his first disciples were allegedly a badger, a fox and a boar. Later he became known as the patron saint of Tinners after accidentally discovering the metal that was to become the backbone of Cornwall’s industry. When a lump of black granite rolled from his fire pit with molten white tin exuding from it, it was a Eureka moment that changed Kernow’s fortunes overnight.

Today the St Piran’s Flag (Baner Peran) with its white cross on a black background is instantly recognisable, and flies high to mark every important Cornish occasion. One of the highlights of the St Piran’s Day calendar takes place at Perranporth on the nearest Sunday to March 5th, which this year happens to be Sunday March 8th.

Previous years have seen the Piran’s Play acted out in three parts across the dunes. A community performance featuring local actors and musicians, the play portrays the saint’s arrival to these sandy shores (cunningly re-enacted with Piran paddling across a pond in a coracle) the setting up of his ministry, his discovery of tin and other miracles, an illustrious meeting with King Arthur himself, and ends with his gentle parting from this world aged an impressive 206.

There’s nothing quite like it. Walking through the dunes with hundreds of people, many dressed in black, white and gold (the colours of Cornwall) some Braveheart types even wearing kilts, and dozens of Cornish flags flapping in the breeze.


This year’s celebration takes a slightly different tack though. The St Piran Trust, the driving force behind Perranporth’s annual re-enactment, is also responsible for the re-excavation of the previously buried Oratory at Penhale Sands. Now it’s been uncovered for all to see, a Grand Procession in honour of the ‘big reveal’ will take place instead, with a piper and drummer ceremoniously leading the way.

At the Oratory itself, James Gossip, head archaeologist on the dig, will give an update on the plans of St Piran Trust and Cornwall Archaeological Unit in connection with the site. And shanty singers The Perraners and the Bencoolen Wreckers will be providing some rousing entertainment. St Piran himself will still be making an appearance, together with several key actors, to tell this well-loved story.

The event will finish up at the ‘second church’ and the Celtic cross, where everyone is invited to join in with singing what is arguably Cornwall’s national anthem, The Song of the Western Men (Trelawny).

So come and celebrate Cornwall’s heritage and distinct identity. Meet at Piran Point, Perran Sands Holiday Park, TR6 0AQ, on the outskirts of Perranporth ready for a 2pm start, on Sunday 8th March. There will be free parking within the car parks at the holiday Park.

Afterwards you can kick back in the bar with a pint of finest Cornish ale, maybe munch on a pasty, knowing that you’ve experienced a real slice of Cornish culture.

View all our cottages nearby >