Home
>
Blog
>
Things to do
>
Walking in South Cornwall 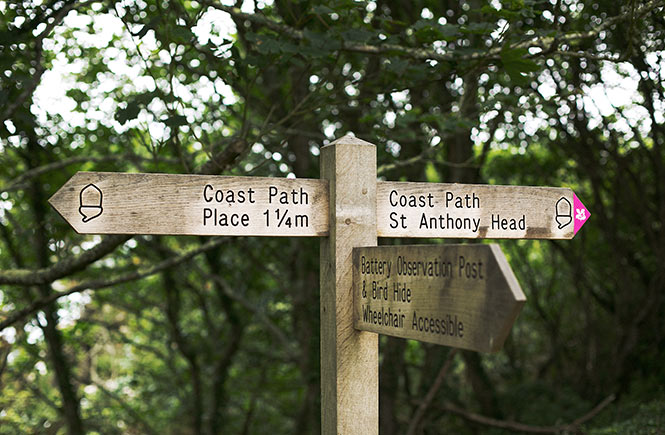 If you’re pondering where to walk in South Cornwall, there are oodles of paths to pick from. Whether you fancy something off-the-beaten-track, a stint on the famous South West Coast Path or a ramble somewhere deliciously secluded, then Cornwall’s south coast will see to it in awe-inspiring style.

With Areas of Outstanding Natural Beauty aplenty, walkers can revel in a sublime range of coast, country, river and cliff scapes everywhere from The Roseland, Falmouth and Fal River to St Mawes, Mevagissey, Fowey and Looe.

A trio of heritage coasts: The Roseland, Polperro and Rame Head, present a magnetic mixture of rural and coastal landscapes; and visitors can explore the green belt of Britain’s far west with a walk along routes such as the Talland and The Giants Hedge, or the Smuggler’s Way – which weaves from Boscastle on the north coast across Cornwall’s majestic Bodmin Moor to Looe’s lulling estuary.

Visitors to Looe may wish to wander to nearby Kilminorth Woods’ stunning nature reserve, or walk the coast path westward toward Talland Bay via a tour of the medieval remains of Lamanna Chapel.

Eastward, there’s Millendreath and the Monkey Sanctuary, along with one of the rambling world’s pièce de résistance: Struddicks, the summit of which affords jaw-dropping aerial-like panoramas across Looe Bay, Whitsand Bay and Rame Head.

Head west from Looe for Polperro and the scenically sweeping Lansallos, which lie directly on the South West Coast Path, allowing you to amble through the villages, smugglers coves and bevy of beaches scattered along the picture postcard route.

Seven miles of more strenuous hiking greets the walker between Polperro and Polruan, but the vistas from Blackbottle Rock make the effort more than worth it.

Walking routes between Polperro and The Roseland Heritage Coasts are replete with eye candy. From Gribben Head and Daphne Du Maurier’s coastline to King’s Wood, Pentewen and inland to the World Heritage Mining site of Luxulyan Valley, the land is littered with a variety of features – from remnants of the county’s industrial past to locations of literary import and, of course, south Cornwall’s natural wonders.

St Austell Bay boasts a myriad of walks, whether you fancy a stroll around famous sights such as Charlestown, an historic interlude via the Iron Age fort at Black Head or a spot of fishing port pretty across the waters at Mevagissey.

Sample the Mevagissey to Portmellon circular walk into the valley and into West Bodrugan Woods nature reserve; hike from Gorran Haven to dazzlingly beautiful, Dodman Point; or trek from St Just-in-Roseland to St Mawes to encounter creek, castle and countryside.

In Falmouth, a route round the Pendennis Headland treats you to the top sights of Falmouth Docks and Pendennis Castle; while various kid-friendly treasure trails such as the Roseland Ranger, Smugglers Trail and Fal River Challenge will guide you along the river as you solve the clues and sightsee en route.

Alternatively, simply stroll along the gorgeous sandy stretches and through the town itself to take in the main attractions, gardens and beaches, while indulging in a spot of retail therapy or dining and refuel at one of south Cornwall’s most celebrated maritime hubs.