Christmas lights and shopping in Cornwall

Perhaps the most famous of all the Christmas lights displays is in Mousehole Harbour. The flick of the switch will illuminate old favourites such as the Mousehole Cat, the Loch Ness Monster and many more. This year the switch on will happen at 7.30pm on Saturday December 13th, and the event will be marked by the Mousehole Male Voice Choir singing, the Pendeen Silver Band, mulled wine and festive food. Parking in the town is limited, so park in the car park at the entrance to the town when approaching from Penzance and follow the string of brightly coloured lanterns down to the harbour itself. The lights will be on every evening from December 14th to 3rd January, apart from the hour between 8pm and 9pm on 19th December, when they are dimmed as a mark of respect as the town remembers the sinking of the Solomon Browne in the Penlee lifeboat disaster in 1981. There is plenty to do in Mousehole when the lights are on, with a real festive buzz around town and a good-humoured crowd of families mooching around the narrow streets . Read more about Mousehole Christmas lights.

Penzance has a lot planned for this year – their lights switch on is a whole-day affair on Saturday November 29th , with a festive Christmas market from 10.30am and singing and other festive entertainment gathered around the statue of Humphry Davy at the top of Market Jew Street. The Mayor will be busy – there are three separate switch ons, but at least they have a horse-drawn Victorian bus to transport him around town! The first switch on is at the Wharfside Shopping Centre at 4.15, with a further two directly after – just follow the bus! This sounds like a really festive occasion – Penzance has some quirky independent shops to explore too so you could break the back of your Christmas shopping while you are here. As an extra incentive to visit, all car parking will be free for the whole day – so if you get carried away in the festivities it won’t cost you a fortune! 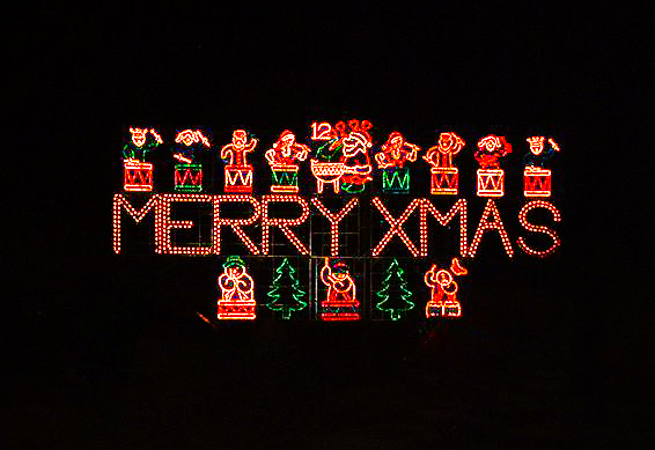 Angarrack is a small village just behind Loggans Moor roundabout at the entrance to Hayle. Yet, for a small village, the lights are disproportionately brilliant. The whole village takes part and there are lights everywhere – the switch on is on November 29th in the Angarrack Inn car park with some fireworks and perhaps the chance of a special Christmas visit from Santa. If you miss the opening ceremony it is still worth a drive or wander around the village to see the lights later on – they will fill you with Christmas cheer!

The Porthleven switch on is on 5th December at 6.45pm, with fireworks, the Porthleven Town Band and a visit from Santa. With Porthleven’s reputation for amazing food, this is one not to be missed, particularly if you appreciate a warm through with a decent dinner after the lights have been lit! Porthleven can be limited on parking – there is one large car park behind the Co-op as you drive in, so make sure you get there in plenty of time.

Late night shopping in the capital 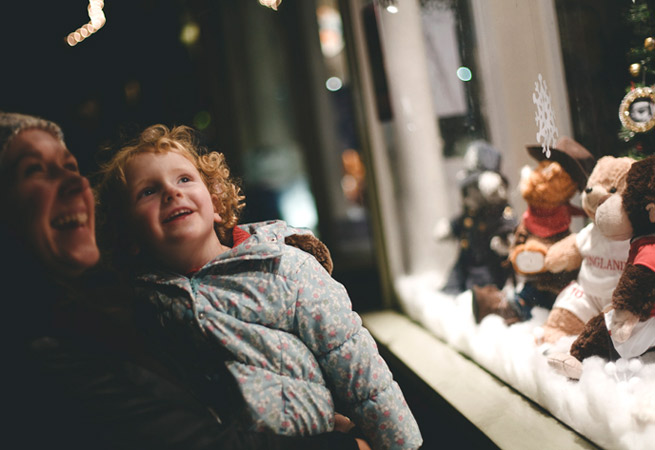 Truro begins its Christmas celebrations mid-November, with a Festival of Lights and lanterns that process through the city’s streets and a festive atmosphere. In previous years there has been a temporary ice rink set up outside the Cathedral, but due to maintenance work this year the rink will not be set up. Fingers crossed for Christmas 2015! Late night shopping in Truro is quite an event, with bands, carolers, festive food stands and entertainers. Shops stay open until 9pm every Wednesday, and many bars, cafes and restaurants remain open to feed the hungry shoppers. A nice way of getting your Christmas shopping done!

Heartlands in Camborne has tried a number of different ventures this year, with a weekend of music including UB40 and the Happy Mondays, and is not disappointing during the Festive season. There will be Christmas Market focussing on local produce and crafts, a chance to eat a festive lunch at the Red River Café and visits from Santa on 6th-7th and 20th – 23rd December. If you decide to visit on December 7th you will witness the slightly odd Santa Run, where runners cover 5k dressed in a full Santa suit to raise money for charity. From personal experience I can let you know that the first five minutes of running in a beard is hilarious – and then you just can’t wait for it all to be over!

Truro’s Victorian Christmas Market will be found on Lemon Quay between 9th and 14th December featuring 70 traders, many in Victorian fancy dress and lots of food and drink and craft ideas for Christmas. Why not combine it with a late-night shopping trip?

Fancy spending Christmas in Cornwall? View all our Christmas cottages >