Pity the poor flooded out campers and mud monsters at Glastonbury. They should’ve been in Penzance for the weekend, where, thanks to Cornish village wisewomen Cassandra and Laetitia Latham-Jones’ blessings, the sun always shines on Mazey.

And this year didn’t disappoint.

Despite the festival’s shoestring budget, the town still managed to look ‘a-mazing’ on Saturday. An unsung dedicated bunch of volunteers had been up at the crack of dawn, cable-tying the traditional greenery round railings, and hanging the gorgeous fluttering banners and flags made during the previous week’s community workshops.

Around 7am, the legendary Golowan band meandered through the streets playing the instantly recognisable Mazey tune to wake the townsfolk. While at 10am the civic procession led by Piglet, the Town Crier, was the first of many parades to wend itself down Market Jew Street, after which the town mayor and newly elected Mock Mayor (Eddie the Snake) gave speeches to the assembled throng. 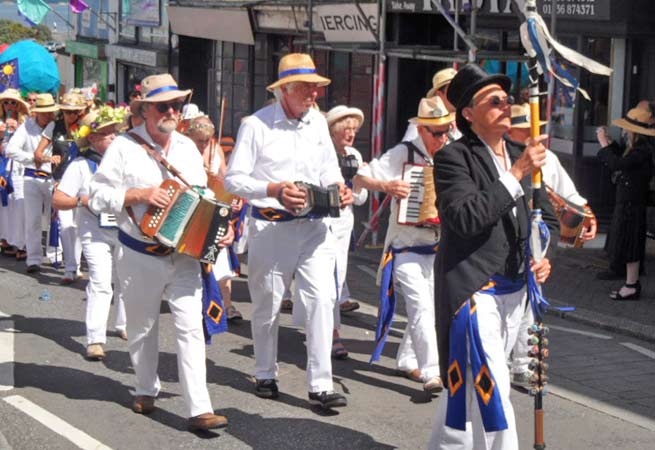 Still plenty of time to browse the street stalls stretching all the way up Causeway Head and down Chapel Street, before the Crowst parade. Schools, community groups and marching bands were a wash of colour, with 2014’s ‘Going Global theme interpreted in all manner of imaginative ways. Who’d have believed that withies (willow stem) PVA glue and paper could be so versatile?

My favourite had to be Mounts Bay School’s Steampunk submarine and fish. The attention to detail (cogs, seaweed, bubble machine) and brilliant costumes complete with goggles, was ace; the Cornish tin miners and their pumping beam engine a close second.

Ok, Dolly, Kasabian, Arcade Fire, Elbow, Jake Bugg et al may not have been on the programme, but there were some cracking sets from The Stone Roots, Flats & Sharps, Louella and the Gambit, and gypsy swing 6-piece, The Mighty Bucca Du.

More good vibes could be had outside the Lugger with Cat of the Sir Vinyl DJs collective on the decks, where the party mood was seriously Caribbean and the rum flowed freely, after which it was time for some serious grooving to the soulful Motown Pirates at the Dock Inn.

Alongside the official bands and music put on by local pubs, Mazey is a hotbed of talented buskers, impromptu performances and random jams, and it’s always a delight to stumble across these unexpected surprises.

For anyone wanting a quieter time of it, Morrab Gardens hosted a midsummer fete, with entertainment provided by the Seef Saffah Belly-Bolly dancers and Shallal Dance Theatre. Or you could stroll down Chapel Street, known for its quality antiques, antiquarian books, vintage clothing and retro furniture, to St Mary’s Church grounds for a cream tea, the kids catered for by a bouncy castle and soft play area.

And for those revellers still going strong, hardcore party-goers could dance the night away at either Sound nightclub, or at The Ritz’s 80s hip-hop, disco, dance hall Mazey Revolutions night. Me, I was tucked up relatively early, all set for another day.

On Quay Fair Day, all the action takes place along the prom and down by the harbour. Wherrytown boating pool sees the starter’s gun fire at 1100 hours prompt, as the withy boat race gets under way. Catamaran style twin hulls are a popular choice as they tend to be more stable, but the bulbous ‘Captain Pugwash’ type hulls have an undeniable elegance about them. Apparently, ensuring you have sufficient ballast on board is key.

Lovely. Inclusive, fun and free… Golowan certainly ticks all the boxes. A massive thank you to all involved who made it happen. And put it in your diary for 2015.