It’s cold. It’s dark. Winter cometh. Must be time to get the withy lanterns out then, take to the streets, make some noise and celebrate community. Well that’s what Cornwall’s capital Truro does for their annual City of Lights festival, so last Wednesday (November 19th) I popped along to take a look for myself, and I can tell you it works a treat. The lead up to the official Christmas Lights Switch On, it’s more about schools than Santa, participation not presents, and coming together to make magic happen.

A partnership between Truro City Council, local businesses, various arts bodies and event organisations, this year a Crowdfunding campaign was launched as well to ensure there was enough money in the kitty to keep the quality sky high. 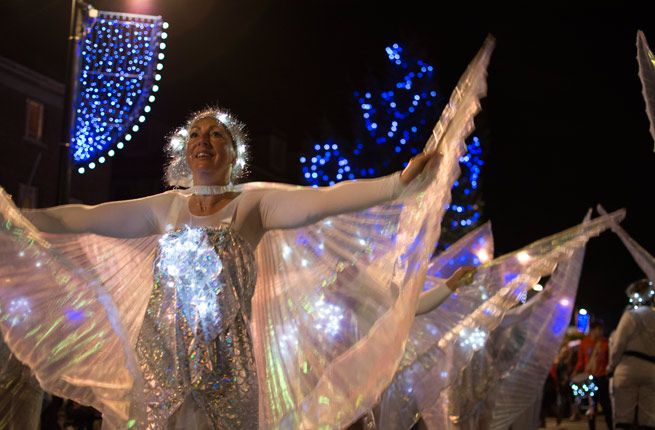 Working with the various schools and local community groups in the run up to the event, professional artists help create the stunning tissue paper lanterns carried by children and young people, as well as designing their own giant sculptural images. This year family and community workshops were also held at Royal Cornwall Museum and Truro Community Library to enable even more people to take part.

Each year the procession has a different theme, this year’s being ‘Heroes’. The WWI centenary commemorations were an obvious starting point, but it was also about celebrating everyday heroes: ordinary people placed in extraordinary circumstances. More than just pretty lights, the festival is a movable feast of music and dancing bringing the streets alive, and the arts to the heart of the city.

With an estimated 25,000 people coming to watch this illuminating event, you had to arrive early. The Park and Ride facility is great, but with the amount of passengers and volume of traffic on the road, the journey in took me nearly an hour. Hectic when you get there, the organisers have taken great pains to ensure the route provides plenty of viewpoints for everyone to be able to see, even arranging special wheelchair access near the Museum. 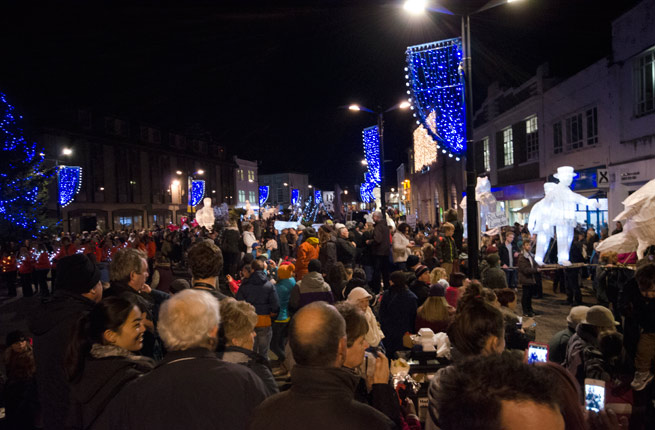 Arriving too late to bag a good spot on Lemon Quay, it was a case of wending my way in the direction of Victoria Square, fortuitously ending up on the outdoor patio of The Wig and Pen pub. Pint in hand and the perfect elevation to see over the street-lining crowds, this prime position also came with its own parade interpreter in the shape of City of Lights regular, Paul Carhart. When I struggled to work out what some of the images were meant to be, he kindly stepped in with suggestions.

Leading the procession and needing no introduction were the Cornish pipers, loud and proud. Behind them an exquisite galloping war horse, the proportions of which would have stood up to scrutiny in any classical sculptural gallery. And it moved, the legs being mechanically manipulated to simulate the galloping motion. 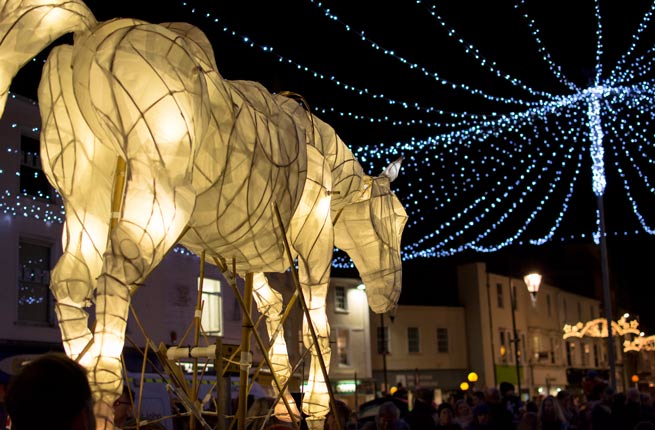 Other images included: a mischief of cute little mice (all button ears and curly tails); a listing 3-masted tallship; fields of poppies; a mass of eyeballs (they probably weren’t, but that’s what they reminded me of!) a polar bear followed by a gaggle of ice cubes; a missile riding lady; two peak-capped striding fellas; a pickaxe wielding miner; a barrow-pushing land girl (complete with chooks); a carrier pigeon; some peace doves; a giant love heart and arm-waving chappie; plus many, many more. 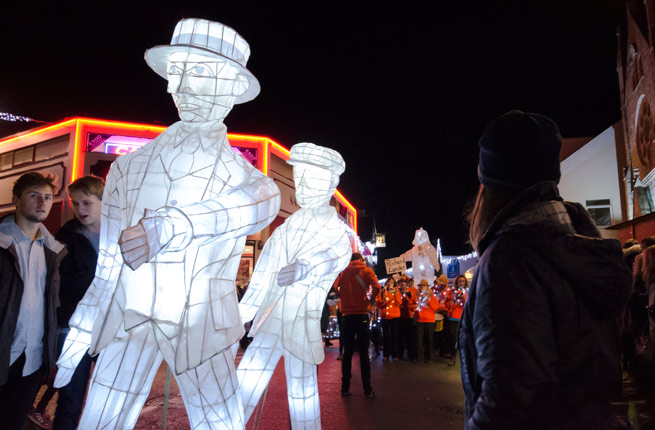 But it didn’t matter how ornate or well-executed or slick a lantern happened to be, for me they all had that ‘wow’ factor, were all equally brilliant, the sum of their parts contributing to what was a truly delightful expression of community engagement.

Add to that several samba bands, the Turkey Rhubarb band and their Guise beast Old Ned in the shape of a crow, more bagpipes and what more could you want?

The lights were duly switched on back at Boscawen Street, where a film called ‘Active Service’ was being screened courtesy of some additional Arts Council England and Feast funding. One of two specially commissioned digital art works, catch them both on any pre-Xmas Wednesday late night shopping night.

A pre-Christmas trip to Cornwall is a great excuse to immerse yourself in beautiful surroundings and avoid the usual city shopping squeezes.