Home
>
Blog
>
Arts and Culture
>
The Tempest – by Miracle Theatre

The Tempest – by Miracle Theatre

Cornwall has an enviable reputation for outdoor touring theatre, and Miracle is one of the reasons why. Entertaining, distinctive and inventive, they’ve been wowing audiences across the UK since 1979. But home is most definitely Kernow. Based at Redruth’s Krowji, you’d be hard-pressed to find a company with more Cornish dates up their thespian sleeves than Miracle.

Celebrating their 35th year of treading the grass, sand, tarmac, castle flagstones, and even the occasional boards, Miracle are currently re-visiting one of their first ever productions, and the Bard’s last play – Shakespeare’s eponymous The Tempest. And miraculously for them, their show on the night when the incredible lightening strikes forked Cornish skies happened to be an indoor one at Dartmouth!

As one of my daughter’s lives in Falmouth, we plumped for the Gyllyngdune Gardens show. Staged in the courtyard next to the Princess Pavilions, despite arriving last minute and pitching our camping chairs at the very back, the set was very forgiving when it came to sightlines. While a select few audience members got to enjoy box seat VIP views over the gardens from their overlooking balconies. 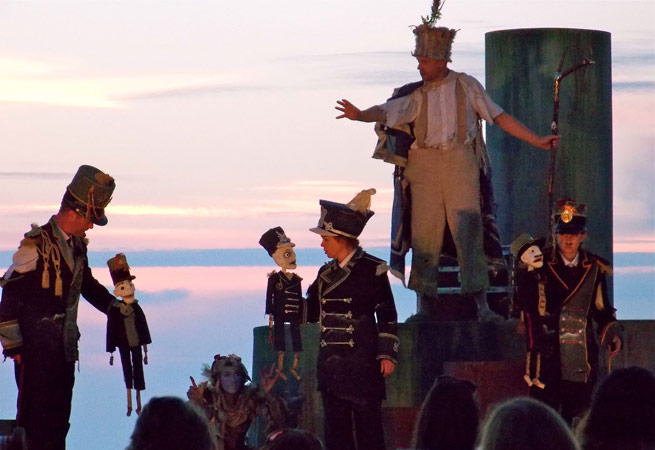 Fairy creature, Ariel sets the scene with Prospero using puppets to tell the story of how the former Duke of Milan was exiled by his usurping brother Antonio and the King of Naples. Cast off in a shonky boat with his infant daughter Miranda, they were ship-wrecked on this magical island. Cue the opportunity for sorcerer Prospero to wreak his revenge years later, by luring the baddies’ boat to the island, and conjuring up a storm to smash their vessel to pieces.

I’m not at all familiar with the story, so sit back and go with the flow. Catherine Lake, as the blue-faced, lithe and very energetic sprite, does an impressive job of prancing, climbing and twirling her way round the stage, and has a sweet voice too.

My favourite moment is the fishing scene where Ariel lands a catch of hats, the seagulls’ cawing overhead, blending in with the hammer dulcimer soundtrack. Her second cast hauls the drowned King onstage, her third, two more lost souls entwined in a net, while bumbling advisor Gonzalo makes a comical entry in a life-ring.

Miracle are justifiably proud of their collaborative projects which bring together artists, musicians, writers and makers from around Cornwall, and is one of the reasons why they’re able to create such visually appealing shows, with exceptional soundscapes. Jim Carey’s spell-binding original music for instance is worth the price of a ticket alone, while the sublimely talented Jude Munden seems unstoppable, her brilliant puppets and costumes always a marvel. The ship-wrecked entourage’s sea-battered, salt-stained uniforms are genius,  “…such stuff as dreams are made of.” 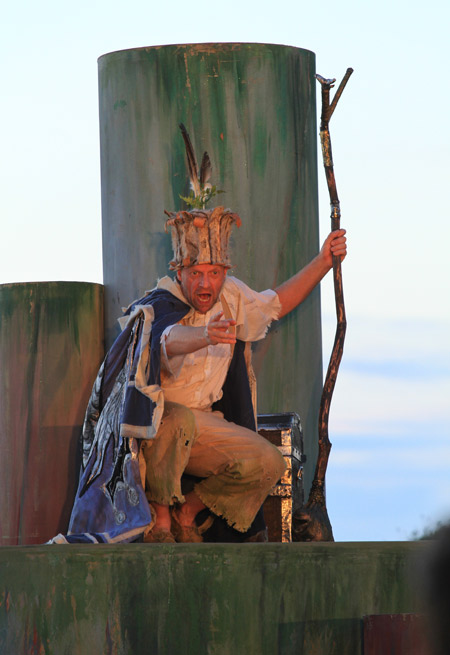 Plots are hatched to kill Prospero and to assassinate the King.  Meanwhile, Miranda (Hannah Stephens) is more interested in making love not war; not at all backwards in coming forwards, and decidedly frisky. In fact the all-singing, all dancing Miracle cast (only six in spite of the actual eleven characters) get to show their multiple talents throughout the performance, Ciaran Clarke as Ferdinand excelling in the dodgy dad dancing arena, with his virgin-snow-heart-douses-ardent-liver dance routine.

True to company founder and director Bill Scott’s artistic vision, and Miracle’s down-to-earth, affable roots, they embrace Shakespeare’s text, chop it and de-mystify it, throw in a few ‘blimey’s’ and assorted humorous touches, and take out the dull bits. It may not suit the purists, but the family audiences and people like me who loathed Shakespeare at school, think it’s a winning formula. After all, theatre was always meant to be for the people and accessible to all. 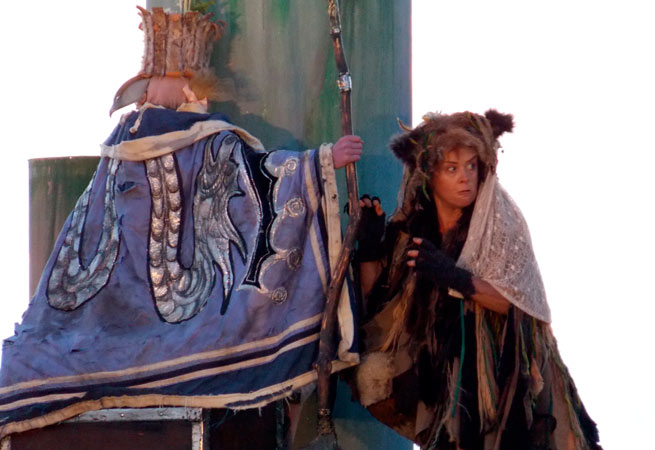 Naturally, all the wrongs are righted, everyone’s forgiven, boy gets girl, and it all ends happily ever after. Hurrah. Quality live theatre, an al fresco supper, bottle of specially brewed light and fruity Miracle Ale, a magical moon and the smell of the sea – top night out in my books. To book your seats visit www.miracletheatre.co.uk.