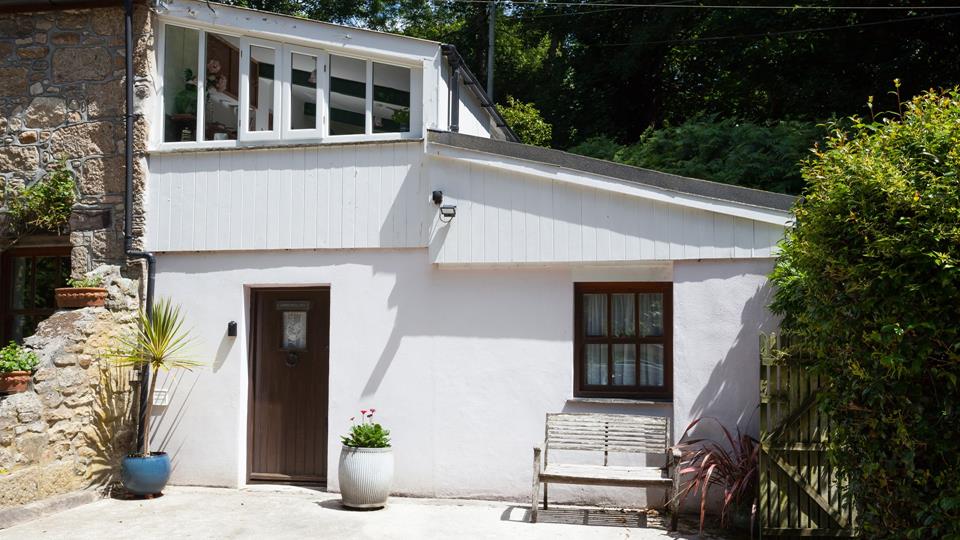 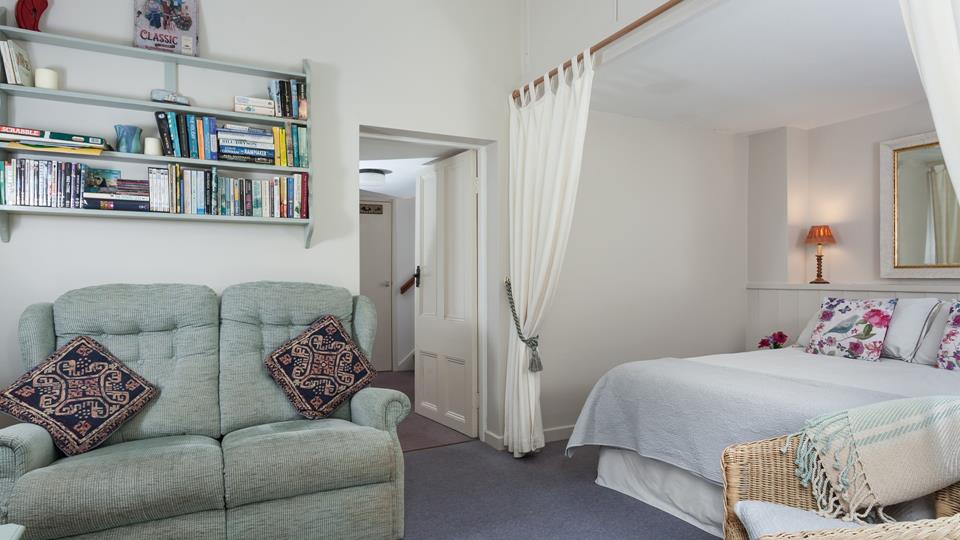 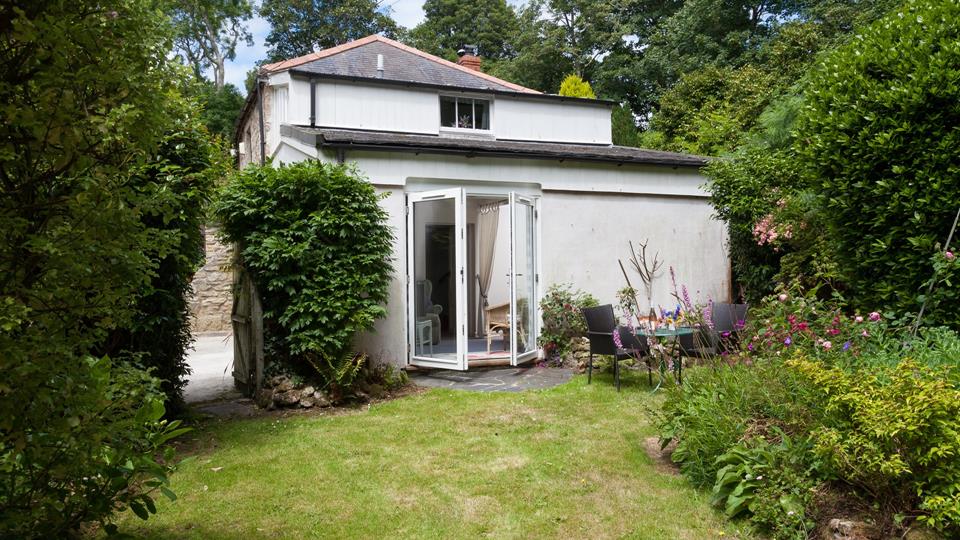 Sitting in a wooded valley between the beautiful village of Porthcurno and the charming fishing village of Mousehole, Lamorna Stream Studio is a true back-to-nature quaint cottage retreat. Carefully styled in an open-plan, reverse living design, downstairs will be a firm favourite throughout the day as with its homely and inviting décor. French doors open out from the cosy living room into the wildflower garden, an ideal spot to enjoy its succession of colour and interesting planting. Lamorna Stream Studio is a hidden bolthole which welcomes guests to fall into step with the gentle tempo of nature. Greet the day with yoga at dawn, before brewing a pot of rich coffee to enjoy in the garden as the world slowly wakes up.

Lazy days will drift by as you enjoy country walks or explore the South West Coast Path to Mousehole, while your four-legged friend bounds alongside with happy abandon. Lamorna is the sort of place which wouldn't look out of place in an episode of Poldark, and when the tide is low you can sit and watch the world go by on small sand and pebble beach at the foot of the slipway. Back at the studio symbolizes pure relaxation, there's a laid-back feel to the interiors, think winter nights curled up with a good book and lazy summer mornings breakfasting in the cottage garden. At this romantic studio hideaway, you'll feel far-removed from the everyday.

via front patio area into hallway, stairs to first floor kitchen, doors to:

bath with shower over, WC, basin.

Do you have any special requirements? 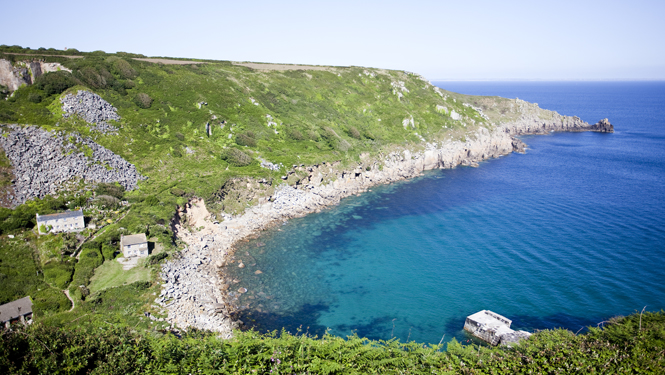 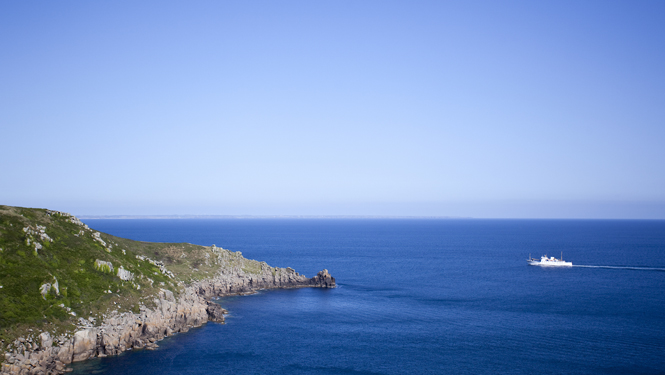 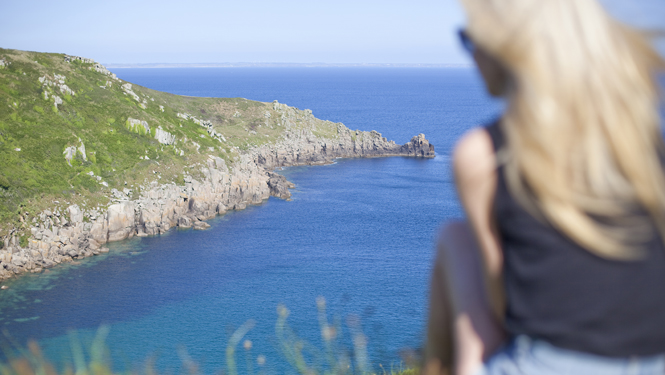 Lamorna Cove is a beautiful and secluded area of Cornwall sat between the pretty harbour town of Mousehole and the glorious Porthcurno beach. You can walk the coastal path to both of these locations, or if you’re feeling adventurous, walk all the way to Land’s End! Lamorna Cove is the perfect base to enjoy a self catering holiday and to explore the further reaches of West Cornwall.

The cliffs around Lamorna Cove are beautiful. The cove has been known for fishing and quarrying in the past. It was also a haunt for artists such as 'Lamorna Birch', particularly in the 1930s. The Cove also has an arts festival and a flourishing village hall, in which you might see international performers from time to time on the Carn to Cove Rural Touring Circuit. The cove lies at the end of a woodland valley, as does St. Loy, a little further south along the coast.

To read about the history of the area, check out our blog on West Penwith - Through the ages.

When the tide is out, Lamorna Cove sports a small sandy beach, but its rocky nature means the area is better known for diving and snorkelling. A nearby beach café serves hot and cold snacks or park up and enjoy an ice cream while looking out to sea. In the summer season you can hire motorboats and kayaks or if you’d rather something less active, the blue waters are perfect for bathing. If a day at the beach is your thing, check out our guide to Sandy beaches in West Cornwall for other beaches in the area which are well worth visiting.

You won't be without places to eat when you enjoy a self catering holiday in Lamorna. The nearby Cove Restaurant serves a delicious, seasonal menu while the Lamorna Wink provides a refreshing mid-afternoon beverage! Drive a few minutes to the nearby village of Mousehole and dine out at the Ship Inn or 2 Fore Street, a bistro-style restaurant on the harbour front. Find out more about Eating out in Mousehole >

Things to do near Lamorna

With the harbour town of Penzance just a short drive away, there's plenty to keep you entertained on a self catering holiday in Lamorna. For ideas on what to do during your stay with us, check out our blog post on Days out around Penzance.

A trip to the stunning tidal island of St Michaels Mount is a must if you're in the area.

Lamorna is the perfect place to enjoy the stunning scenery that the West Cornwall offers. With coastal paths to the east and west, and other inland walks to traditional Cornish villages, ramblers will be in their element. Visit the ancient celtic site of the Merry Maiden stone circle on route to Porthcurno or make the famous 'Good Friday' walk to the quaint fishing village of Mousehole. Read more on our blog on Mousehole Walks.

A lot of famous people holiday in the hills and coves of Cornwall. In the 1970s, three locals (an out of work actor, a DJ, and a young writer) decided to start a hospital radio station, named Duchy Hospital Radio. They set up in a caravan in a car park behind West Cornwall Hospital in Penzance. The actor and writer were particularly interested in spoken word programmes and secured an Uher, the must-have portable reel to reel audio tech of the day. The actor discovered that a famous person was getting away from it all at Lamorna Cove Hotel.  An interview with George Harrison would get Duchy Hospital Radio noticed! The famous Beatle was only too pleased to help and invited them to join him at the hotel for a cream tea. For an hour or more the actor and writer chatted amiably to George about being famous, hiding away in Cornwall, what the other Beatles were like, and the price of tea and chips. Back in the Duchy Radio caravan, the novice reporters soon discovered that in the excitement of meeting their hero, the actor had forgotten to press ‘Record’!

Visit Santa and his elves at the magical grotto at Paradise Park on selected dates in December. Tickets include a gift from Santa and there's no need to book, tickets are on sale on the day from 10am.

Held on the anniversary of the consecration of the Parish Church of St Eia in 1434 AD, Feast Day offers visitors to witness - and even join in with - some centuries-old traditions. A morning precesison led by the Mayor to bless the Well of St Eia. Following this, the Mayor will 'Hurls the Silver Ball' into a crowd of children who assemble on the beach below. The one who returns the ball to the Guildhall steps by midday receives a silver coin. In the afternoon the Mayor then throw pennies from the balcony of the Guildhall for children to collect.

The West Cornwall Spring Show has been running for over 90 years and is a showcase for horticultural excellence within the area of Penwith.

Join in the celebrations at this community led festival of free entertainment. The annual event celebrates the engineering and mining history of the Camborne area, and is dedicated to Richard Trevithick, pioneer of high pressure steam power & inventor of Road and Railway Locomotives.

Golowan Festival is an annual community arts event that celebrates local culture and the social and natural environment. 'Mazey Day' takes place on the Saturday of the festival and guarantees to be a very colourful affair!

Popular with visitors and locals alike, this exciting festival celebrates everything literary, including spoken, written, recited and sung word. Take part in the reading and writing discussions and activities and enjoy the many performances.

For two weeks only, Adventure 001, supporters of Cornwall Air Ambulance, will be bringing their helicopter experiences to St Ives! Choose from a 6 minute flight from £35 to a 30 minute flight from £96 and take in the incredible views across St Ives bay and beyond!

A fun packed day hosted by the RNLI lifeboat Station. See the lifeboats on display and in action on the water with demonstrations featuring one of the HM Coastguard helicpoters!

Now becoming a sellout event, this festival keeps attracting more and more visitors who come to enjoy a wide range of acts, including music, theatre, poetry and visual arts.

The 2018 shout will feature more than 20 sea shanty groups for a fun weekend of shanty singing, sailor and pirate themed fancy dress and beer. This year's event will be raising money for Cornwall Air Ambulance and its New Heli Appeal and takes place in various pubs and venues in St Ives.

Find unique Christmas presents and tasty treats at Flambards Christmas Craft Fayre. Stalls will be set up in various areas of the park, there will be Christmas music to get everyone in the festive spirit and a chance to meet Santa too.

Possibly the most well-known and popular Christmas Lights in the county, Moushole combines stunning displays against the backdrop of their gorgeous Cornish fishing harbour to bring real festive magic to all who visit at this special time of year.

Each year, the people of Penzance celebrate the Winter solstace with a festival of Cornish tradition, torch processions, and dancing.

The tradition of Tom Bawcock comes from the feast or famine lifestyle of Cornwall.  The story goes that it was just before Christmas; there had been no fish for weeks, the boats couldn’t get out into the raging storm, the village was starving. One man, Tom Bawcock, dared to take his boat out of the harbour’s safety. He returned with enough fish to make fish pie for the whole village.

Today, a festival takes place each year to celebrate Tom Bawcock's bravery. During the festival, Star Gazey pies are eaten in memory of this famous event.

Spend New Year's Eve in St Ives for an unforgettable evening at the largest fancy dress party in the county. Ring in the New Year with an unbeatable fireworks display by the sea.

What our guests say...

We know how important honest reviews are when it comes to booking your holiday. To help you choose the right property for you, we publish all reviews left by guests who have stayed here in the past, with the few exceptions stated in our Review Guidelines. Please bear in mind that some facilities referred to by past guests in reviews can be removed or changed at any time.

We are currently waiting for our first review for Lamorna Stream Studio. Book a stay here and be the first one to leave a review!